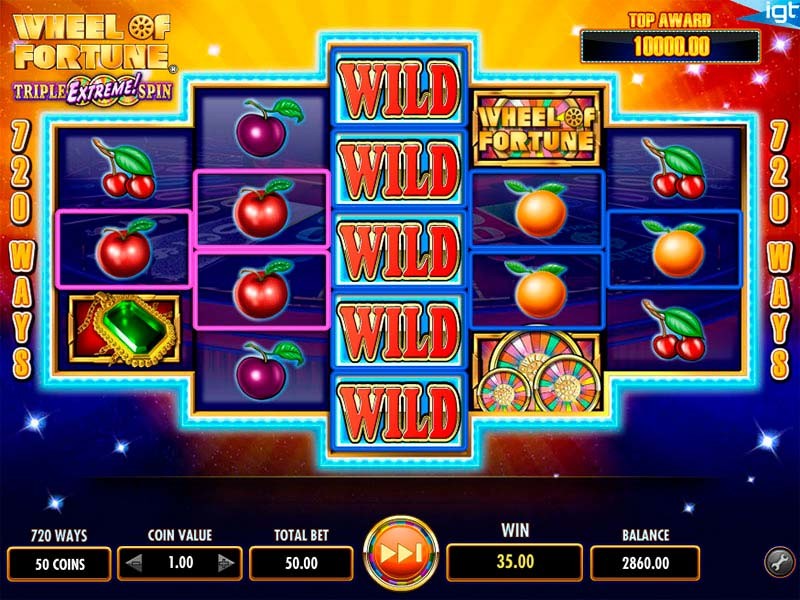 No matter how hard software developers try to come up with the things when talking about online slots, the feeling remains that there’s not much they can change. However, it looks like IGT is ready to show to the world that patterns are made to be broken. Just a quick look at the Wheel of Fortune Triple Extreme slot is enough to understand there’s something really special about this game. It’s why we decided to take a closer look at of Fortune Triple Extreme Slots slot machine and share with you everything there is to know about it so you can have an excellent experience while playing it. 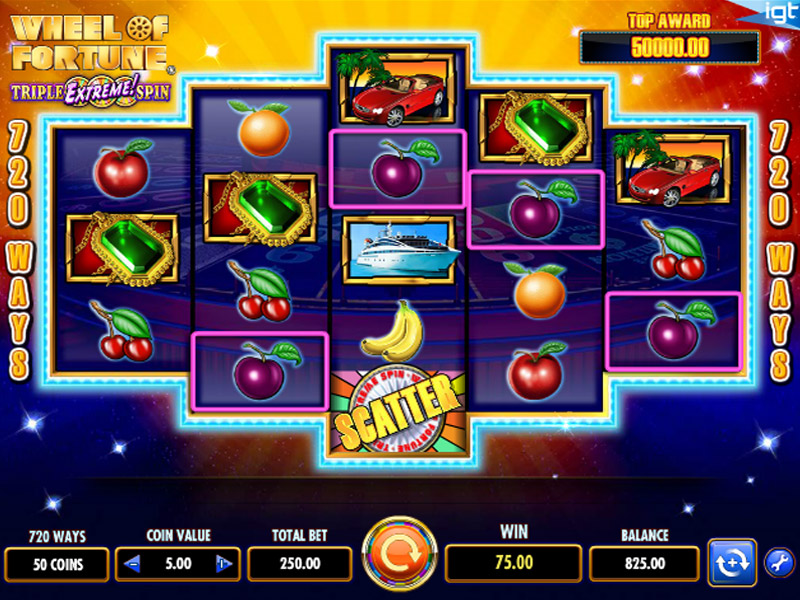 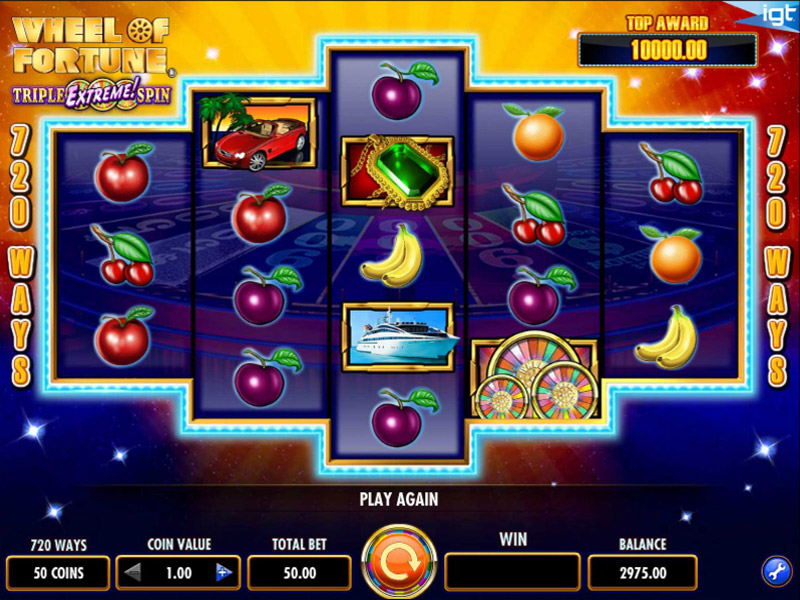 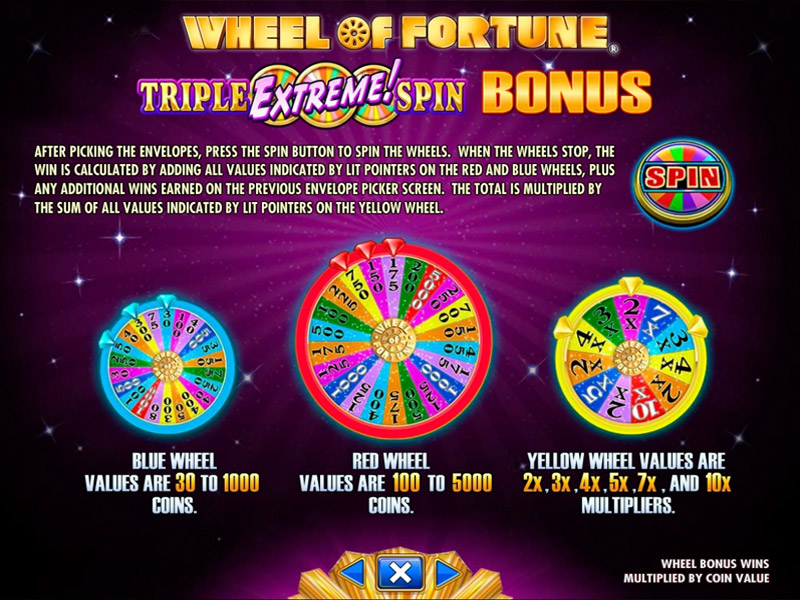 You may think that just because you played IGT slots before, you don’t need to go over this Wheel of Fortune Triple Extreme review because you know pretty much everything there is to know about the online casino games they deliver. Well, that’s where you are wrong. It is not just another online slot from IGT. It’s one that doesn’t use any pre-known pattern and comes with several features that are special and unique. So, if you are determined to find out everything about this online slot, from Wheel of Fortune Triple Extreme free spins features, bonus features, paylines, or how exactly to win more when playing this game, keep reading the review we prepared. 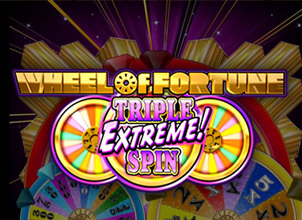 If you are already taken a look at the reels of Wheel of Fortune Triple Extreme, you already know that this is not like the other slots you played recently. It doesn’t have what you can call a standard layout, and all that you can say about it is that it offers five reels to spin the symbols on it. However, instead of the classic paylines, this game uses ways to win. To be more precise, there are 720 ways to win, and this means you won’t have to worry about adjusting the payline value. In other words, it doesn’t matter on which line the symbols appear, as long as you have three identical symbols on consecutive reels, left or right, you will score a win.

You probably heard about 243 ways to win slots before. Well, if you are curious about how this slot can offer even more than that, the answer is not that complicated. To get the total ways to win, you just need to take a look good at the reels of Wheel of Fortune Triple Extreme. You will see that while it has five reels, the rows vary from 3 to 5 and getting bigger towards the middle reel. So, that’s how this online slot can deliver 720 ways to win instead of 243 like many other slots do now.

The last piece of general information that we want to include in this section is the Return to Player offered by Wheel of Fortune Triple Extreme slot. The figure sits at 94.04%, which admittedly is a bit lower than what we get in other IGT slots. However, even if the RTP is lower, everything is compensated by the 720 ways to win offered by the slot.

Graphics, Audio and Gameplay for Wheel of Fortune Triple Extreme

The gameplay and the way they organized the reels on this slot isn’t the only innovative touch. The graphics of this casino game are also improved compared to other IGT titles. And you shouldn’t take this the wrong way, thinking that the company isn’t capable of delivering video game-like graphics. It’s just that with their previous titles, they wanted to focus on the gameplay and the winning possibilities offered by the slot. However, since this one also comes with a radical approach, they decided to give it a boost on the visual side as well. The animated reels and symbols create a very nice atmosphere, and it’s all completed by the colorful background and sharply done images.

From an audio perspective, you won’t feel much of a difference when you play Wheel of Fortune Triple Extreme slot. Sure, perhaps you would like to get more out of spinning the reels. However, the developers didn’t feel the need to go overboard with this aspect. There’s a sound effect for when you spin the reels, and each time a special symbol appears on the reels. Also, you are getting notified when a win occurs with a highlight of the reels. They contain the matching symbols and a sound to go with it, but that’s about it.

We’ve reached the part that most of you are interested in. Analyzing the Wheel of Fortune Triple Extreme game gameplay isn’t the most straightforward task in the world. Since the slot doesn’t use any of the usual patterns, there is plenty to analyze. Having established that there are no paylines to adjust, the only thing you can shape the gameplay is by selecting the Coin Value for the 50 coins that are set as a standard for the 720 ways to win. You can choose coin values of:

It enables you to adjust the bet that is correlated with the balance you have to play. While the minimum bet isn’t as low as with other IGT slots, this slot is still pretty versatile when it comes to the types of players that can enjoy it. You won’t get to play too much with a small balance. However, that doesn’t mean you don’t have the same chances of hitting a nice win. 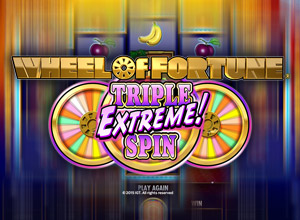 After taking one quick look at the reels of Wheel of Fortune Triple Extreme, you understand that this is not exactly like the other slots developed by IGT from a symbol perspective. The playing card numbers are gone, and instead of the usual higher-value symbols, they chose to use fruits, riches, and fast cars.

All types of fruit replace regular symbols. The ones with the lowest values are the bananas and the plum, then the orange and cherry give you a better reward, with the apple being the most rewarding of the standard-paying symbols.

On the other hand, we have a group of symbols that take you to think about luxury and what you can buy if you’re successful spinning the Wheel of Fortune. First in line, a red sports car in a tropical background, then an emerald and gold jewelry, a luxurious yacht and, the highest-paying symbol, the game logo itself.

Of course, such an innovative online slot also needs Wild and Scatter symbols to make things even more interesting. The Wild symbols are easy to spot as it represented by an image with this exact text on it. It can appear on reels 2, 3, and 4 and replaces all other symbols to form a winning combination. The only symbols that it can’t replace are the scatter and the Wheel of Fortune symbol. The scatter symbol is the one with SCATTER written on it, and three or more of these babies can trigger the mini wheel bonus where you can win up to 3850 your bet. Last but not least, there’s the Triple Extreme Spin symbol, represented by three wheels in one picture. It will activate the Triple Extreme Spin Bonus, but we will cover that in the following paragraph.

The Blue wheel contains values from 30 to 1000 in coins

Determining which one of the wheels you will spin is done by picking you to get to pick from an equal number of envelopes as the number of triggering symbols. IF you get all the colors, you play all the wheels. If not, you only turn the ones whose colors you got in the envelope.

If you are thinking about new ways on how to win Wheel of Fortune Triple Extreme rewards, don’t worry about it. We have you covered with knowledge about everything you need to know. As you have seen in this review, there are multiple possibilities to adjust the bet value so that you place bets that make you feel comfortable. It is the first thing you should work on. Play the game on demo mode and see how the gameplay feels with various types of bets. Imagine that the funds would have been real and figure out how much you can afford to deposit to get a win

Playing the Wheel of Fortune Triple Extreme mobile app is going to give you the same winning chances. So, changing the platform isn’t going to modify your experience at all. However, the advantage of playing on a mobile is that you can take the game with you no matter where you go.

Spin the reels of an innovative slot and see what IGT can do to surprise you. We were very intrigued by this slot and recommended it to all players that wish to catch a breath of fresh air in the overcrowded industry of online casinos. Wheel of Fortune Triple Extreme delivers an exceptional experience for all player types!